House prices across all English cities have risen above their 2007 pre-crisis peaks for the first time but Zoopla is warning sellers not to get over-excited when pricing their properties.

Figures from the portal – based on Land Registry price paid data and mortgage valuations – found annual price growth among the UK’s largest cities last month hit a three-year high of 3.9%.

All cities, except for Aberdeen, where prices fell 4.3% annually, recorded annual house price inflation of at least 2% last month for the first time since February 2017.

The highest growth was in Edinburgh, up 5.9%, while Nottingham and Leicester each recorded growth rates of 5.3%.

Zoopla highlighted that stock is also up 2.6% annually, but is lagging behind demand which is up 26%.

Stock levels in nine cities are lower than a year ago by as much as 6%, Zoopla said, with most of the shortages in areas where prices are rising fastest.

Richard Donnell, research and insight director at Zoopla, said: “It has taken 12 years for house prices in all English cities to return to their previous pre-crisis levels.

“Some cities returned to 2007 levels within four years, as the economy and job growth rebounded. In others, it has taken much longer as the mismatch between demand and supply has been less pronounced.

“An imbalance between supply and demand is supporting the current rate of house price growth – a trend we expect to remain in place over the first half of 2020.

“We do not expect a material acceleration in the rate of growth in the foreseeable future, as affordability pressures will limit the scale of price growth, especially across southern England.

“There is a risk that, in some markets, sellers may become unrealistic about the expected sales price for their home. This is more likely in London and southern England where the market has been weak, and supply remains constrained. Housing demand is up, but there remains a price sensitivity amongst buyers, especially in the highest value markets.” 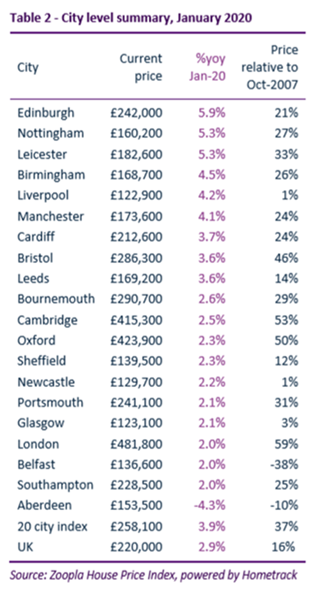